Kyonyuu Elf Oyako Saimin – tells the story of the prosperous kingdom of Agraliel, surrounded by forest, and inhabited by pureblood elves. Among them is the current Queen Efildis, for many generations she has ruled this country as a High Elf. It would not be an exaggeration to say that with its power it has a great influence on the environment and is actually the center of the universe of these lands. There was a strict breeding rule behind the welfare of these elves. Elves, known as a long-lived tribe, are not free to leave offspring. By the time the body matures and is able to give birth to children, they are sent to a place called the “Sanctuary of Life” and during the descent of God to earth, ceremonies are held under the direction of a high elf, during which a new life will be given. The usual mating, which other races are engaged in for reproduction, is considered something dirty, which only animals, not noble elves, do. Therefore, it is considered that it is obscene to seek pleasure, as well as to touch the naked body. Why many elves didn’t even know about their sexuality… everything was going well until a guy with hypnotizing power appeared and reminded them of their true lustful essence. 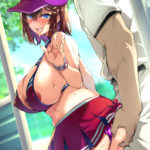